DeviantArt member who goes by the name SemiAverageArtist created this cool adult version of Bart and Lisa.

Jackson Tjota, a digital artist from Indonesia, gave Bubbles, Blossom and Buttercup a jaw-dropping comic book superhero makeover. If you want to see more grown up Powerpuff Girls make sure to check out Tjota’s gallery. 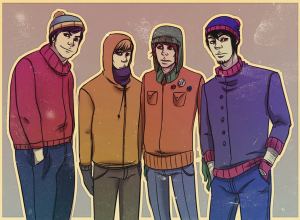 From the amazing artist Andra Hilde comes an incredibly cool take on the boys from South Park. Andra did an awesome job aging these characters and making them feel like real people. However, given the stuff that goes around on that show, it’s probably for the best that on the screen they don’t look quite human. 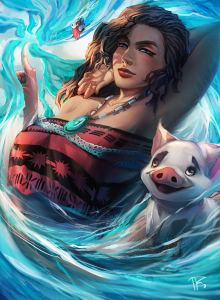 Algerian artist Ramzy Kamen created this amazing version of a grown up Moana sunbathing in the ocean with her pet rooster Heihei and pet pig Pua. Since sequels are never off the table with Disney, it’s not entirely impossible that one day we really get to see a grown up Moana in a movie.

The talented artist Rosso Winch created an incredible adult version of the high school cheerleader moonlighting as a crimefighter. Kim is all grown up now and judging by this fanart she may well be an Agent of S.H.I.E.L.D. But in all seriousness, a more serious and edgy version of the Kim Possible cartoon might not be such a horrible idea, if done right.

In case you ever wanted to know what these two would look like all grown up, the talented artist Emilyena did an amazing take on Dexter and Dee Dee as adults. Dee Dee looks as crazy as ever and Dexter turned quite dashing with his beard and smug look.

n 1997, Ash was introduced as a ten-year-old boy and ten years later he’s still a ten-year-old boy. While we prefer Ash to stay a ten-year-old, we can’t help but wonder what he would look like all grown up. This bearded take on an adult Ash was masterfully created by the talented DeviantArt member ovolon.

This amazing version of an adult Dash comes from concept artist Mark Yong. We have to admit, this older version of Dash kind of reminds us of Quicksilver because of the hairstyle. Perhaps a third installment in The Incredibles franchise can focus on the grown up versions of Violet and Dash. That would be one hell of a movie.

Source : Grown-Up Cartoon Characters Made Mature By A Deviant Community