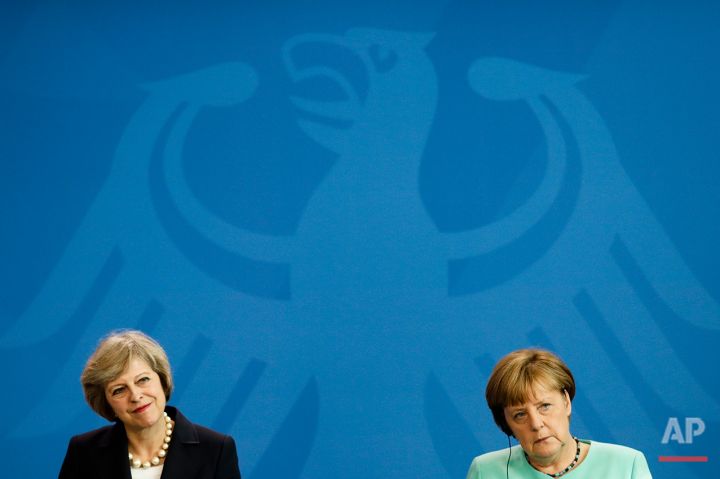 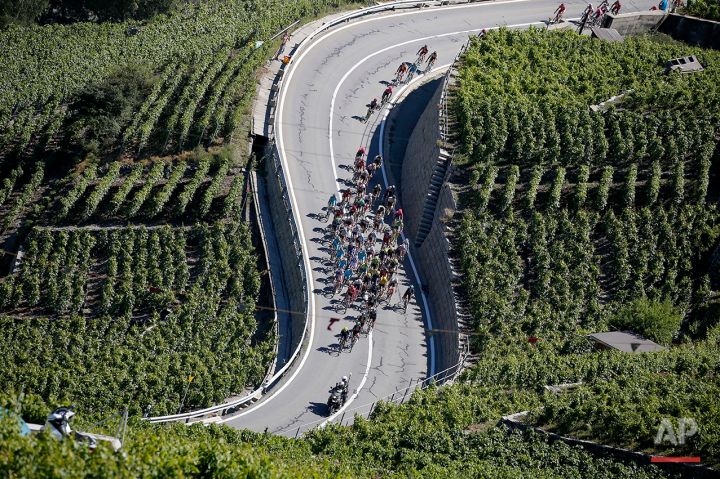 The pack climbs during the seventeenth stage of the Tour de France cycling race over 184.5 kilometers (114.3 miles) with start in Bern and finish in Finhaut-Emosson, Switzerland, Wednesday, July 20, 2016. (AP Photo/Christophe Ena)

Liu Xiaodong, the wife of prominent Chinese dissident Zhao Changqing, holds her son Yaokun Zhao as they are interviewed in Hayward, Calif., Wednesday, July 20, 2016. Liu and her son plan to live in the Bay Area for about a year as refugees. Zhao has been one of China’s leading human rights and democracy defenders since the 1989 Tiananmen Students Movement. (AP Photo/Jeff Chiu)

Mourners walk past the Israeli barrier as they carry the body of Muhey al-Tabakhi, 12, during his funeral in the West Bank town of Al-Ram, near Jerusalem, Wednesday, July 20, 2016. A Palestinian hospital official says the boy was killed after clashes erupted between Israeli forces and protesters in the West Bank. Ramallah hospital director Ahmad Bitawi says the boy was killed by a bullet to the chest. Israeli police deny that live fire was used against protesters.(AP Photo/Nasser Shiyoukhi)

An X-ray sheet shows pellet injuries on Insha Malik, 14, as a relative sits by her hospital bed in Srinagar, Indian controlled Kashmir, Wednesday, July 20, 2016. Insha was hit by pellets while watching a protest. The largest street protests in recent years in the disputed region, that left dozens of people dead and hundreds injured erupted more than a week ago after Indian troops killed a popular young rebel leader. (AP Photo/Mukhtar Khan) 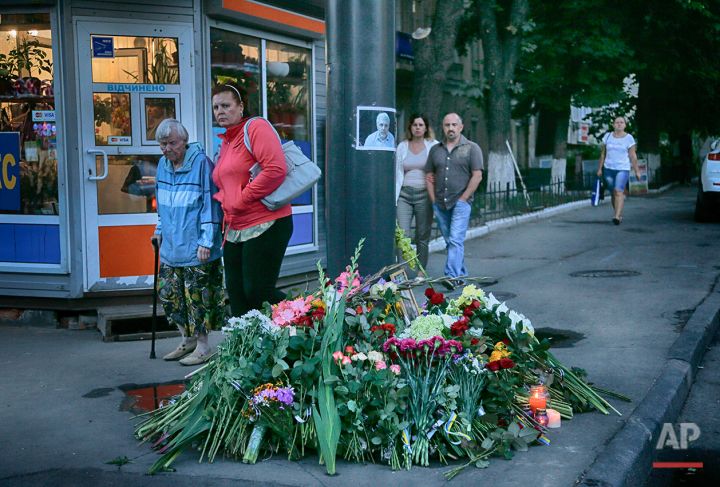 People pass by a portrait of Pavel Sheremet surrounded by candles and flowers in Kiev, Ukraine, Wednesday, July 20, 2016. The prominent journalist was killed in a car bombing in Ukraine’s capital, Kiev, on Wednesday, sending shockwaves through the Ukrainian journalist community that was shaped by the gruesome killing of the publication’s founder 16 years ago. (AP Photo/Efrem Lukatsky)

An activist walks past police cars during a demonstration against racism and police violence in Rio de Janeiro, Brazil, Wednesday, July 20, 2016. A delegation of activists from the Black Lives Matter movement is in Rio de Janeiro to highlight racism and police violence in the Olympic city ahead of the summer games. Both the Brazilian and U.S. groups complained of racial profiling, police killings and the criminalization of poor communities. (AP Photo/Silvia Izquierdo) 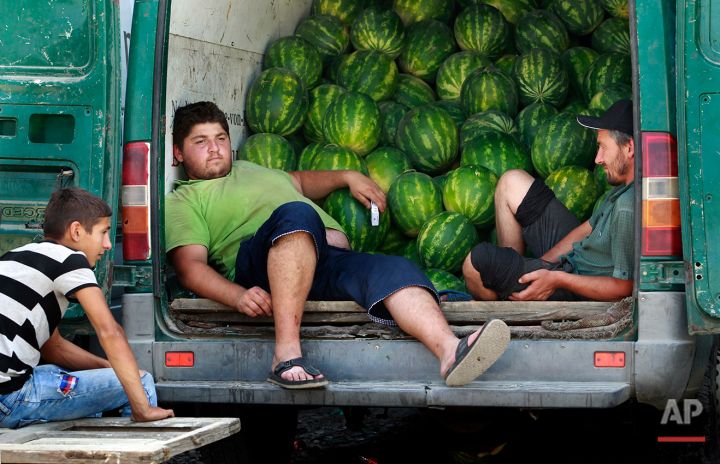 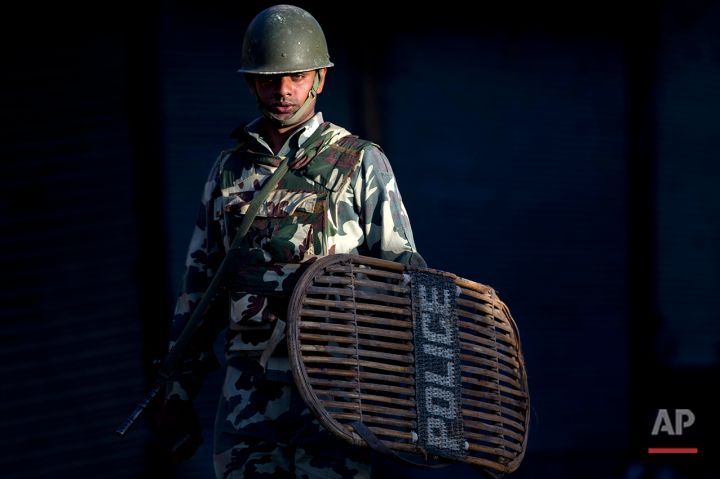 An Indian paramilitary soldier walks back towards his base camp on the twelvth straight day of curfew in Srinagar, Indian controlled Kashmir, Wednesday, July 20, 2016. The largest street protests in recent years in the disputed region, that left dozens of people dead and hundreds injured erupted more than a week ago after Indian troops killed a popular young rebel leader. (AP Photo/Dar Yasin) 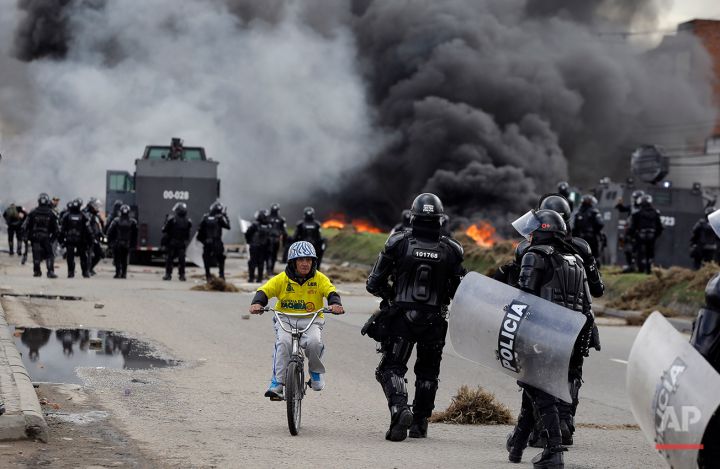 A man rides his bicycle past police clashing with striking truckers in Bogota, Colombia, Wednesday, July 20, 2016. Hundreds of truckers clashed with police on Wednesday on the 41st day of their strike which has made food scarce in some areas of the country. Truckers are demanding a higher price for freight, lower fuel prices and fewer license regulations for cargo. (AP Photo/Fernando Vergara) 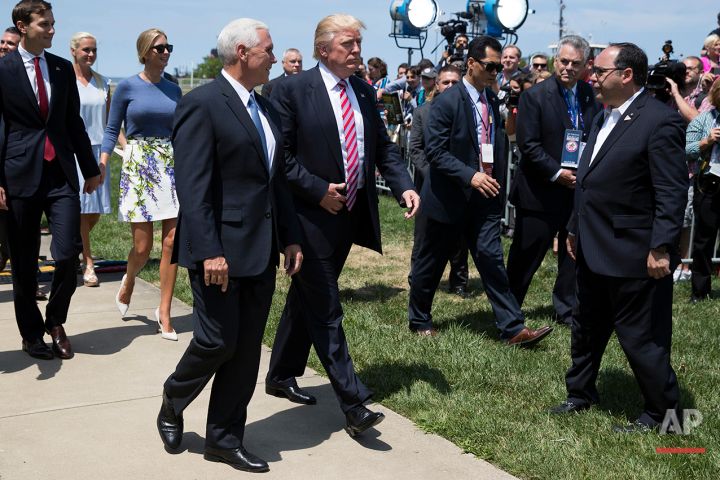 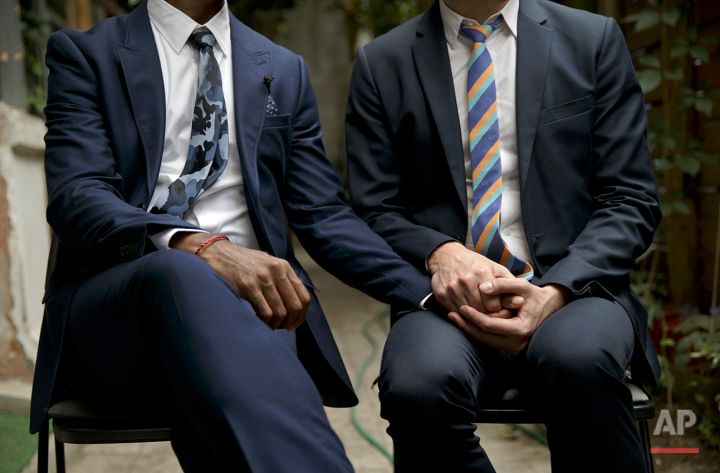 Clay Hamilton, left, and Adrian Coman, a US-Romania a gay couple who got married in Belgium and seek legal recognition of their status in Romania hold hands in Bucharest, Romania, Wednesday, July 20, 2016. A ruling by Romania’s Constitutional Court seems to have paved the way for Romania’s parliament to change the laws governing marriage. (AP Photo/Vadim Ghirda)

Gabriela Gomez, 3, poses for a photo decked out in a military costume before the start of a military parade celebrating her country’s 206th anniversary of independence from Spain, in Bogota, Colombia, Wednesday, July 20, 2016. (AP Photo/Fernando Vergara)

Izabel Nascimento, president of the SUIPA animal shelter, stands near Empezao, at the shelter that is known by its Portuguese acronym SUIPA, in Rio de Janeiro, Brazil. The 12-year-old horse survived a rifle shot in 2014. Empezao is one of many animal’s to survive Rio’s daily shootouts. The city does not keep data for animal deaths or injuries related to shootings. But veterinarians at the shelter say they have seen a sharp increase in recent months, especially in slums where pets and strays roam freely. (AP Photo/Silvia Izquierdo) 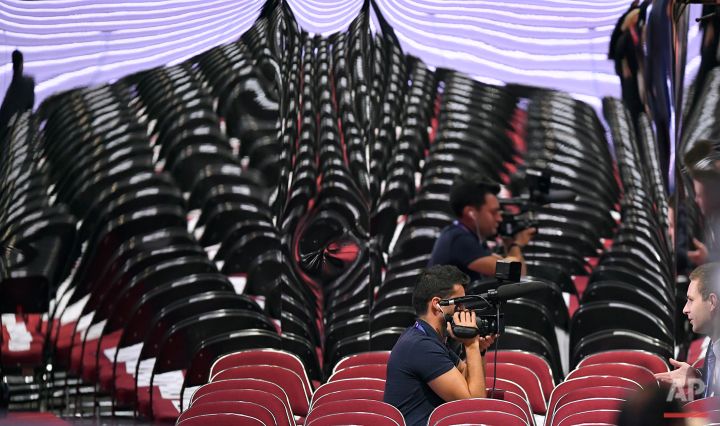 A camera operator is reflected in a mirrored side of a camera stand during the third day of the Republican National Convention in Cleveland, Wednesday, July 20, 2016. (AP Photo/Mark J. Terrill)

Spotlight is the blog of AP Images, the world’s largest collection of historical and contemporary photos. AP Images provides instant access to AP’s iconic photos and adds new content every minute of every day from every corner of the world, making it an essential source of photos and graphics for professional image buyers and commercial customers.  Whether your needs are for editorial, commercial, or personal use, AP Images has the content and the expert sales team to fulfill your image requirements. Visit apimages.com to learn more.

Written content on this site is not created by the editorial department of AP, unless otherwise noted.